I hope you enjoyed the video, I think it’s a very good example and demonstrates easily the role of Running Analysis in Injury Rehabilitation in particular for this Runner with Gluteal Tendon Pain.

Following the Running Analysis, I asked the runner to run with a wider stance on the right side, I asked him to make it very subtle. You can see from the image below how the dropping of the left hip, which increases the tension or lengthens the affected tendon has ceased. 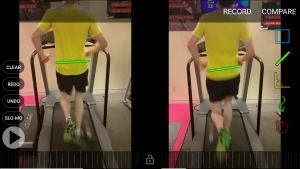 This Runner was given an individualised Running Programme easing him into his new style. A succession of short runs over 4 weeks with progressively more exposure to his new running technique will allow his body to adapt to the new demand placed upon it and avoid any new injuries as a result of the changes.