The knee joint is comprised of the femur (thigh) and tibia (shin), on top of these you have the patella (knee cap). The patella sits in a groove on the femur, thus creating a joint called the Patello-Femoral Joint.

As the knee bends when walking, running, going from sit to stand, the patella slides up and down the groove. If for whatever reason the movement is a bit off to one side or not moving as much as it should or too much then this can lead to Patello-Femoral Joint pain. Sometimes it is referred to as Runners Knee in those who run. Runners Knee is just an umbrella term for several types of knee pain. 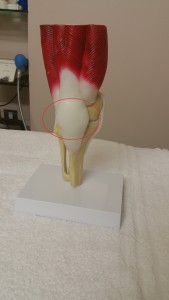 The Knee and Patello-Femoral Joints with Quadriceps Muscles

As a general rule pain would be felt along the front of the knee and often is not very local, just a vague pain. Activities such as going up or down the stairs, walking, running can be painful.

There are a myriad of reason why this may happen and thankfully a research group from Holland, pulled all the research together and came to a conclusion on the factors that make people more susceptible to Patello-Femoral Joint Pain.

The Q angle is the angle of your femur relative to the pelvis. If your Q angle is greater than about 14 degrees, then you have a greater chance of developing Patello-Femoral Joint Pain pain.

Females tend to have greater Q angles than men, due to having a relatively wider pelvis and this contributes as to why females have higher rate of Patello-Femoral Joint Pain pain than men.

Control of your hip will have a profound effect on your knee. This is old news in the Physio world and is really important. Having weak gluteal muscles can make the knee buckle inwards when running/walking/using stairs. This inward movement of the femur can make the patella not track properly in the groove in which it sits, over time this can create pain.

Again something in your control to change. The quadriceps are a group of 4 muscles coming from the pelvis and forming a tendon that passes over the patella and inserting onto the shin. As you could imagine weakness here could alter how the patella sits and moves in the groove.

The Sulcus Angle is the depth of the groove in which the patella sits on.

So, if you have ever wondered why you have Patello Femoral Joint Pain or what causes these are the known reasons.